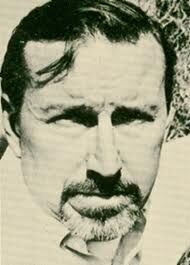 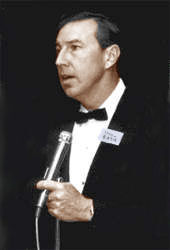 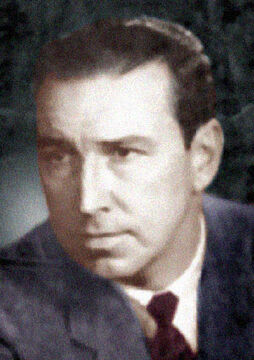 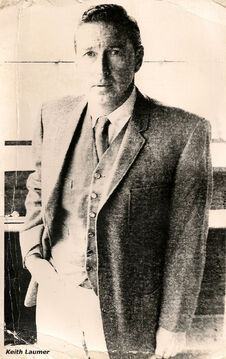 John Keith Laumer (June 9, 1925 – January 23, 1993) was an American science fiction author. Prior to becoming a full-time writer, he was an officer in the United States Air Force and a U.S. diplomat.[]

Keith Laumer is known for the Bolo and Retief stories. Stories from the former chronicle the evolution of super tanks that eventually become self-aware through the constant improvement resulting from centuries of intermittent warfare against various alien races. The latter deals with the adventures of a cynical spacefaring diplomat who constantly has to overcome the red-tape-infused failures of people with names like Ambassador Grossblunder. The Retief stories were greatly influenced by Laumer's earlier career in the United States Foreign Service. In an interview with Paul Walker of Luna Monthly, Laumer states "I had no shortage of iniquitous memories of the Foreign Service."

In addition to his Bolo and Retief stories, Laumer's more serious adventures included the subjects of time travel and alternate-world adventures such as found in his The Other Side Of Time, A Trace Of Memory, and Dinosaur Beach.

Four of his shorter works received Hugo or Nebula Award nominations ("In the Queue", was nominated for both) and his novel A Plague of Demons (1965) received a nomination for the Nebula Award for Best Novel in 1966.

During the peak years of 1959–1971, Laumer was a prolific science fiction writer. His novels and stories tend to follow one of three patterns:

In 1971, Laumer suffered a stroke while working on the novel The Ultimax Man. As a result, he was unable to write for a few years. As he explained in an interview with Charles Platt published in Dream Makers Volume II (1983), he refused to accept the doctors' diagnosis. He came up with an alternative explanation and developed an alternative (and very painful) treatment program. Although he was unable to write in the early 1970s, he had a number of books published which had been unpublished at the time of the stroke.

In the mid-1970s, Laumer partially recovered from the stroke and resumed writing. However, the quality of his work suffered and his career declined (Piers Anthony, How Precious Was That While, 2002). In later years, Laumer also re-used scenarios and characters from earlier works to create new books, which one critic felt limited their appeal:

Alas, Retief to the Rescue doesn't seem so much like a new Retief novel, but a kind of Cuisinart mélange of past books.

His Bolo creations were popular enough that other authors have written standalone science-fiction novels about them.

An anthology "Created by Keith Laumer", Dangerous Vegetables, appeared in 1998. Actually edited by Martin H. Greenberg and Charles G. Waugh, the book's introduction (by Ben Bova) said the book was Laumer's idea but that he had died without completing it.