A Bolo is a fictional type of artificially intelligent tank. They were first imagined by Keith Laumer, and have since been featured in science fiction novels and short story anthologies by himself and others. 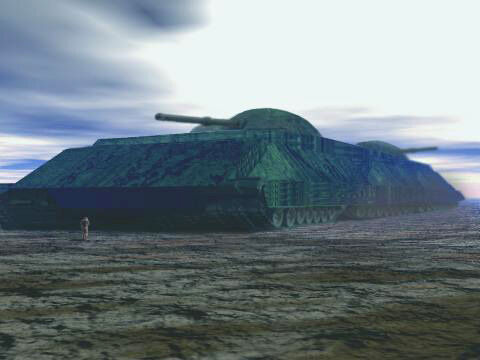 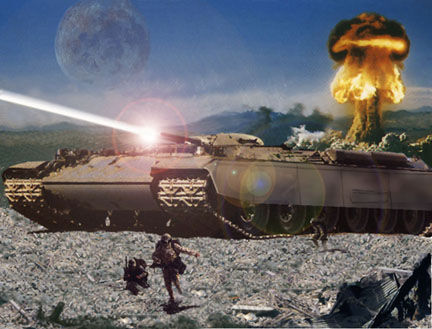 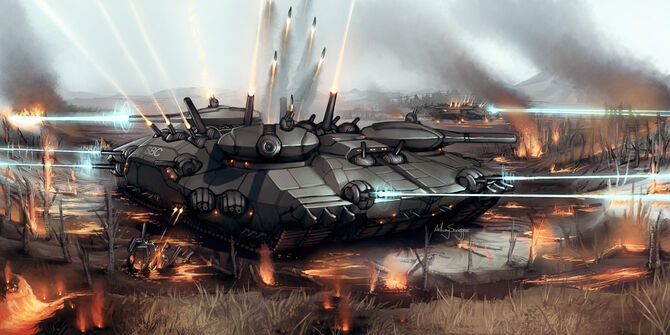 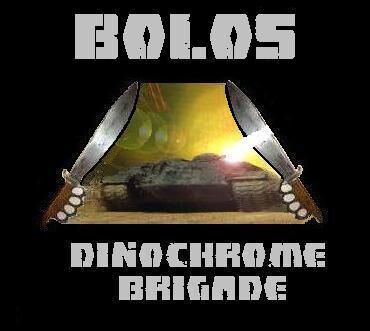 In the future timeline, early models were simply superheavy tanks controlled by programming intended to reduce the need for a human crew through automation. However, as the programming increased in complexity, Bolos became more effective at mimicking intelligence, and in later models were self-aware, controlled by artificial intelligences. According to Laumer's future history, the first Bolo was developed in the year 2000 by the fictional Bolo Division of General Motors.[1] As humanity spread beyond Earth, Bolos were used to protect first the Empire, and then the Concordiat of Man. For millennia, each successive mark of Bolo proved to be the lynchpin of humanity's ground-based defenses, especially in the numerous and protracted wars against various aliens, most notably the Deng and the Melconians in the 30th century. Bolos were also used in smaller scale raids, skirmishes and internal conflicts between warring human parties. Following the genocide of the Final War with the Melconians, the surviving Bolos became crucial in sheltering and protecting the few scattered remnants of humanity during the long slow process of rebuilding.

Bolos and their human commanders are assigned to an elite Concordiat unit called the Dinochrome Brigade, which traces its lineage back to various units on Earth. Individual Bolos are generally identified by a three-letter prefix which is generally extrapolated into a given name - this name is generally used as the default access code for a new commander. Often, Bolos on garrison duty are older surplus or reserve units on loan, in which case their three-letter prefix is changed to "SOL". For example, this happened with the Mark XX Bolo LON-2317 (Lonesome Son) which was renamed to SOL-0045 in The Road to Damascus.

Bolos are generally deployed in groups to provide fire support, though individual units are occasionally detached to perform garrison duty - later marks of Bolo are considered to be so capable that a single unit can be assigned to guard an entire planet, even during periods when a human commander is not available. Nevertheless, a commander is provided whenever it is feasible to do so. When deployed by the Dinochrome Brigade for major combat operations, Bolos usually serve with what have come to be called "Planetary Siege Regiments." Before the development of higher marks of Bolos, powerful enough to often allow a single Bolo to conduct major planetary operations without support, the Regiments were only called "siege regiments."

The earliest Marks of Bolo were non-sentient: the Mark I was essentially a 150 tonne conventional tank powered by diesel engines and equipped with various servos and mechanical devices to reduce crew requirements. Conversely, the 300-tonne Mark III incorporated limited AI routines allowing limited independent action and was powered by ionic batteries able to support combat-level activity for up to ten years and enabling operation even when fully submerged. The level of AI support was increased with each successive Mark, until the incorporation of Psychotronic circuitry in the Mark XX led to Bolos becoming self-aware and capable of fully independent operation. (However, there are indications that the Mark XV Bolos may have approached sentience closer than was thought by the designers.) The Mark XXVI proved capable of true independent strategic planning, while the final standardised Bolo, the 32,000-tonne Mark XXXIII was fully self-willed and able to operate indefinitely without external support.

A key factor in Bolo psychotronic design is the need to address public and military concern over the potential catastrophe which could be unleashed in the event of a Bolo disobeying orders or being suborned. To mitigate this, a number of safeguards were included in the psychotronic design - specifically a focus on loyalty, honour and a strong sense of duty, as well as a restriction on the level of awareness and processing power made available to the Bolo outside of combat. These safeguards often combined with the prejudices of ranking officers to cause the unnecessary destruction of a Bolo during combat - for instance, the first truly self-aware Mark XX Bolo (DNE/Denny) fought to the point of destruction "for the honour of the regiment", as detailed in "The Compleat Bolo". With Bolos being able to survive for centuries, older Marks often ended up scattered across the galaxy abandoned on old warfields or retrofitted for use in farming or heavy construction. On several occasions obsolete Bolos have gone rogue, causing significant destruction, loss of life and bad publicity for the Dinochrome brigade: as a result, a special unit was set up to find all such units and burn out their control centers.

On several occasions, Bolos have turned against their commanders during combat: in Bolo!, a damaged Mark XXV loses its IFF capability, causing it to attack a fellow Bolo. Similarly, a Mark XXXIII (HCT/Hector) was subverted by an alien AI and turned into a prison guard in Bolo Strike. Conversely, Bolos have occasionally refused to carry out illegal or dishonourable orders, such as Unit NKE (Nike) in The Triumphant or Unit SOL (Surplus On Loan) in The Road to Damascus.

The Mark XXXIII Bolo was the last standardised Bolo built by the Concordiat prior to the Melconian destruction of Earth. A number of "seed corn" colonies survived the genocide policies carried out by both sides and went on to produce new models of Bolo: these are generally labelled as Mark XXXIV and were larger in size, design and capabilities.